2014 marks 25 years since the formation of the Grammy Award winning roots-music trio Nickel Creek, dormant since 2007. Violinist Sara Watkins, mandolinist Chris Thile, and guitarist Sean Watkins agreed that they should commemorate this milestone with at least a few concerts, a festival date here or there, and maybe an EP of new tunes to play at the shows. But when they convened in June at Chris’s New York City apartment for a few days of writing, their creative synergy returned with a vengeance. These practically life-long friends immediately realized they had an album’s worth of tunes in hand.

“We fell into step very quickly,” Sara recalls.” We felt like we had started right up again. Each of us seemed happy with the direction of the songs we were writing and the contributions all around. It was just really fun. We were excited enough about what we were coming up with to really go for it and make a proper recording and do a proper tour. We wanted to make it a real step forward. And that’s what we did.”

After the close of their Farewell (For Now) tour in 2007, which culminated at the Ryman Auditorium in Nashville, Nickel Creek was not actually contemplating a break-up, as many in its large fan-base feared. These still startlingly young band-mates simply needed some time to grow up, musically and personally, away from the glare of the spotlight they’d shared since they were kids. Sara and Chris were merely eight years old when they and the 12 year-old Sean played their first gig as Nickel Creek at a San Diego pizza parlor, having been brought together by a mutual music teacher. Chris’s dad played bass. After ten years of work on the contemporary bluegrass circuit, the prodigious trio landed a deal with the independent Sugar Hill Records, championed by violinist Alison Krauss, who would produce Nickel Creek’s first two Sugar Hill releases, its self-titled 2000 debut, and the 2002 follow-up This Side, which garnered a Best Contemporary Folk Album Grammy.

Nickel Creek’s third studio album, 2005’s Why Should the Fire Die?, was a more ambitious effort, prefiguring the expansive solo work to come individually from these musicians. It was produced in part by Eric Valentine, whose credits in punk, alt rock, and pop made him the least likely—but somehow just right—candidate for the job. Last fall he reunited with the band in Los Angeles to record A Dotted Line, which they completed in less than two weeks, channeling the same sort of artistic energy that marked those initial days of writing in New York.

“We made this record in about twelve days,” Sara says. “For a couple of days after that Sean and I put on a few extra parts, but the majority of that record was done over those 12 days. It was really intense but really exciting. We hadn’t made a Nickel Creek record so quickly before. We always had a lot more time to allow for discovery, experimentation—a leisurely pace. This was hit-the-ground-running, come prepared, and it was a great process. Eric had produced Why Should the Fire Die? and,  in a way, we were kind of picking up where we had left off. “

“Thank God for that guy,” say Chris. “Eric has such incredible ears and an absolutely exemplary work ethic, an ability to stay neutral and keep perspective during intense periods of focus. I think about how when you are focusing on something, you can’t see to the right or the left at all. But Eric manages to be both focused and present while maintaining a surprising amount of the big picture.”

“I've been absolutely LOVING the Lyric. I get comments every show I play on how great it sounds.”

“I have been using an LR Baggs bridge pick-up on my violin for over ten years. Every couple years I explore the pick-ups options from other companies and, every time, I have come back to Baggs. The LR Baggs violin pick-up allows me to be heard when sharing a stage with drums and loud amps, without sacrificing the balanced tone and character of my fiddle's acoustic sound.”

“We were excited every day to be there,” Sara adds. “And during the mixing, it all came together. The tones are warm and full, and I think our songwriting has improved. Each of us has developed in our songwriting abilities and we enjoy singing together in a way we didn’t always appreciate in the past. Over the years of not recording or performing as Nickel Creek we realized it was something that we loved, singing together as a band. Having grown up singing together, there is something natural about our voices and it’s really fun to harmonize. Our voices have come to match each other’s really well. Sean and I are siblings, and Chris is about as close to a sibling as you could get.”

“It feels more natural and easy than it ever did, by far,” reflects Sean. “Getting to spend time alone with our own musical personalities has helped us mature. As long as we were a band, for 18 or 19 years, it was easy to find your personal musical identity obscured by your band-mates’. So taking yourself out of that and being yourself musically, standing on your own two feet, for me it helped to clarify, to bring into focus the kind of songs I wanted to write, what I’mgood at, and try to bea better version of who I am musically. I think that’s happened to all of us to a certain extent.”

Not long after Nickel Creek began its hiatus, Chris, a 2012 MacArthur Fellow, formed the more experimental quintet Punch Brothers, which has completed three albums for Nonesuch. He also received a 2013 Best Contemporary Folk Album Grammy for The Goat Rodeo Sessions (with Yo-Yo-Ma, Stuart Duncan, and Edgar Meyer); and most recently released the first volume of his arrangements for mandolin of Bach’s Sonatas and Partitas, produced by Meyer. Sean Watkins formed the duo Fiction Family with Switchfoot singer Jon Foreman, putting out two albums and hitting the road with an expanded touring lineup. He also helmed a country-rock super-group, Work Progress Administration (WPA), with former Toad the Wet Sprocket singer Glenn Phillips and fiddler Luke Bulla, abetted by a number of L.A.-based fellow travelers, including keyboardist Benmont Tench, pedal steel player Greg Leisz, and Sara Watkins too. WPA emerged out of L.A.’s Largo club, where Sara and Sean regularly host their Watkins Family Hour. It was those freewheeling family gigs that helped shaped Sara’s own solo work, as she gained confidence as a front person, a song-writer, and an interpreter. In fact, it was the owner of Largo who first suggested she cover Sam Phillips’ heartbreaking “Where Is Love Now,” the final track on A Dotted Line. Sara found fans in former Led Zeppelin bassist John Paul Jones, who produced the first of her two solo albums, and Garrison Keillor, the creator of public radio staple A Prairie Home Companion, on which Sara frequently appears and has even served as the first and only guest host.

For A Dotted Line, each musician brought partially finished material–—“starts,” as they like to call them—-to New York City, and together they fashioned new songs. Opening track “Rest of My Life” started out as a morning-after riff—-“maybe it was actually midday,” Sean corrects—as he surveyed the living-room detritus after a party at his Hollywood home. It was a rueful little melody that Chris then built upon, and he found words that somehow managed to express what the woozy Sean was feeling. Similarly, Sara had been holding on to “Destination,” but didn’t fully put it together, with its driving chorus and urgent lyrics, until Chris and Sean started working on it with her. “You Don’t Know What’s Going On” dates back to Why Should the Fire Die?, but Chris, whose youthful first marriage was unraveling at the time, admits “I was too in the moment to write anything anyone else would want to listen to.” “Christmas Eve” is another breakup song, with lyrics by Sean, but its blue holiday theme is transformed by a soaring, improvised vocal coda that almost dispels the pain. Sean explains, “We toyed around with arranging the echoes but we realized the best thing to do was just go for it, not plan things out.”

“Hayloft” is an unlikely cover of a tune by a Canadian band called Mother Mother that in its original form is like an 80s new wave tune crossed with prog rock. Chris’s brother had played it for him once on a ride home from the airport and Chris had been obsessing over it since. Nickel Creek transforms it into a kind of rollicking speed-folk that feels utterly—and hilariously—their own. Just as freewheeling in its own way is “Elephant in the Corn,” an instrumental that the trio hoped would have a Looney Tunes soundtrack feel. Sean came up with the opening melody and Chris and Sara added to it: “It’s like an elephant in a ballerina costume riding a unicycle and holding a parasol.” Edgar Meyer joined in the fun on Arco acoustic bass.  Recalls Chris, “Edgar really jumped into the character with great gusto and comes in with that big bass melody which just tickles me to no end.” Sean blends humor with a little bit of pathos in “21st of May,” a tune he wrote on Mai 20, 2012 as certain fire-and-brimstone Christian pastors were waiting with their flocks for the world to end.

There’s lot of bittersweet moments on A Dotted Line, culminating in Sara’s aching rendition of “Where Is Love Now,” but the exuberance of the playing, and the magic of the harmonies, gives the album an exhilarating, uplifting feel. Notes Chris, “There’s a joyful aspect to Nickel Creek no matter what we’re doing. Things just steer themselves into that sort of place. There’s definitely a little bit of wide-eyed wonder just in the sound of the three of us making music together. And I like that. Is it a reversion of some kind? Are we reliving our musical adolescence or is it just what happens when the three of us get into a room? It’s felt more like the latter to me.  We will go poke around in the dark corners but always with a heavy dose of optimism.”

“The band is going to be stronger and more exciting, at least for us,” decides Sara, “During the hiatus we developed a lot individually and on this record, we got to bring together what we’ve learned and make a record we are really proud of. We needed the break. It was really important to step away for a while, and that has made this process that much more exciting to us. And we’ll be getting to do a lot more of it this year. We are going to be touring, playing some festivals. This band is a big part of our individual musical careers. It feels great, really balanced. I think I’m a better musician than I was then, I can bring different things to the band, and we’ve all grown up quite a bit.” 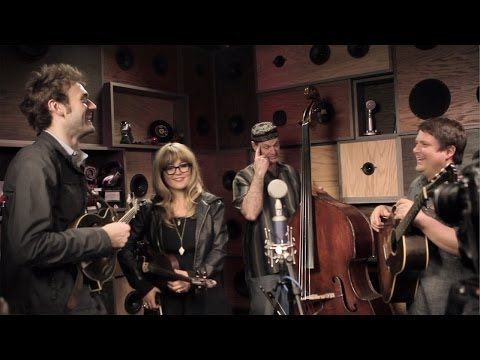 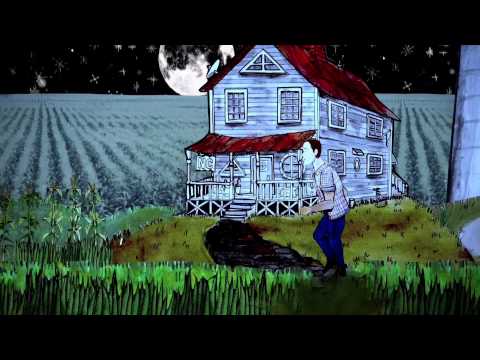 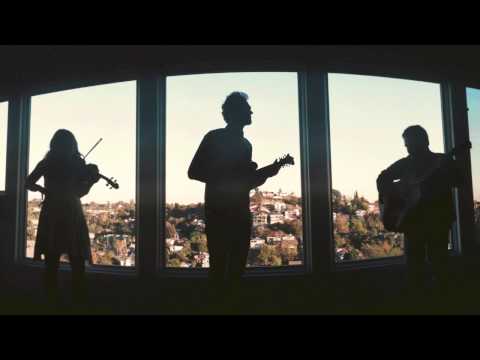 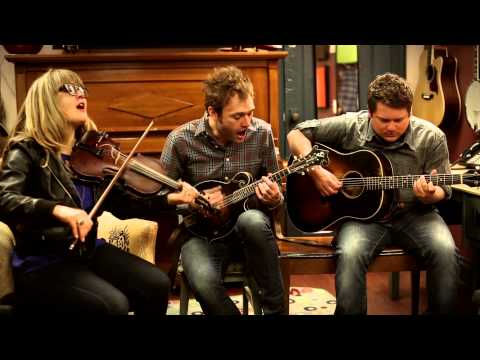 How I Wrote That Song: Nickel Creek, "Helena"